All over the Internet, there are videos of different dogs going into a full-on sprint towards a lake, a pool, a stream, a river, or even a bucket of water. These dogs love to swim, and, often, their owners do too! Well, a lot of people do wonder can German Shepherds swim? This is one breed you will not see regularly in these types of videos.

The short answer to this question is yes. However, it will take some time for them to learn how to swim. They will involve with training, supervision, and persistence on the part of their owner. The good thing is since these dogs are naturally intelligent. Training them, as with any other type of training with a German Shepherd, is usually a pretty quick and painless process!

It is important to remember a few things if you decide to teach your German Shepherd to swim. For one, they can actually become strong swimmers. Strong enough to compete with some breeds made for going into the water. This is because of their natural traits of strength and agility.

They also have to learn to swim using all four paws instead of just their front two. Which is a common mistake that Shepherds make when they are learning. There should also be a minimal intake of water. (Although I probably should not have to tell you that).

What German Shepherds Were Bred For

The German Shepherd became a recognized breed in 1899. After many years of fighting among dog experts in Germany attempting to standardize dog breeds in Germany. The Shepherd was bred for that purpose: herding and protecting sheep, cattle, and other animals that often needed the guidance of a friendly, stronger animal.

As such, these dogs were bred with the traits that would make them successful in this purpose. Which is intelligence, strength, speed, and cleverness.

It may not be a well-known fact among readers, but sheep and cattle are not strong swimmers. They do not tend to do well in the water. With this in mind, the first German Shepherds naturally learned to keep their flock away from water where they could accidentally drown. 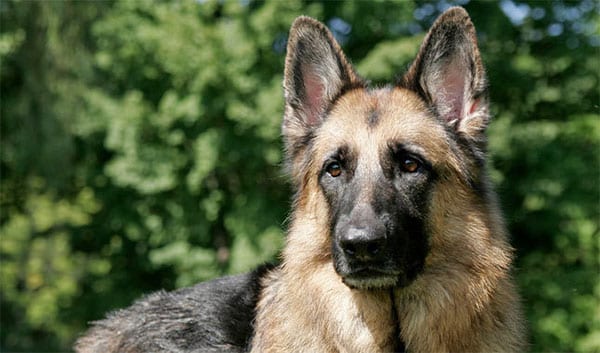 This does not mean German Shepherds are afraid of water by any means. If you have a pool and a Shepherd, it is not uncommon to see your companion get in the pool. They would probably play in the pool if the water hits about mid-leg height on them. German Shepherds actually love water!

Unlike hunting dogs such as Labrador Retrievers. Their primary purpose involved protecting their flock from anything threatening. Which could be anything from wolves and coyotes or the nearby pond.

However, it is important to keep in mind that each dog is going to be different. They might get right in the water and be able to swim like a fish with no problems. On the other hand, your pet might not enjoy swimming at all. You should keep this in mind during training and at all times during your pet’s life.

If your dog is afraid of water, slowly introducing it to them may help. Start by getting their feet and the back of their neck wet and slowly move forward. If it does not work, remember to never push your German Shepherd past their comfort level. Always keep an eye on your dog and if they seem nervous or scared, it is best to stop until they are ready to move forward.

While German Shepherds were not bred specifically for swimming. They were bred with a number of natural characteristics. These characteristics would help with the job they were made for but can also make swimming easier for them to learn!

For one, German Shepherds are naturally intelligent and clever dogs. With this in mind, they will be relatively quick to figure out how to move in the water. Or at the very least, get back to dry land. They will also be able to learn and respond to your commands more adeptly than some other breeds.

German Shepherds are also notoriously courageous animals, which comes from their history of herding. If their flock was threatened by anything from a fox to a bear to another person. German Shepherds had to be able to provide a line of defense. This is so the other animals under their care could get away from the threat as quickly and safely as possible.

This means that they will likely not show much fear when faced with a new situation such as swimming. Even if they are a bit nervous about getting in the water and show some apprehension. They will often start to try it, especially if you are in the water with them!

Physically, German Shepherds have long legs and aerodynamic bodies with webbed feet. This means that their time in the water will be easier than a dog that does not have these traits. As they will (eventually) be able to seamlessly glide through the water.

They also have the stamina and agility necessary to master moving all four of their limbs. In a motion to push them through the water at a decently fast pace for long periods of time.

Additionally, German Shepherds have a double-layer coat. The outer layer acts as a weather repellent – meaning it will slickwater off and act as a protectant. Which will not weigh them down by absorbing the water. The second layer acts as an insulation. Keeping their body temperature at the level it needs to be for them to feel comfortable and healthy. 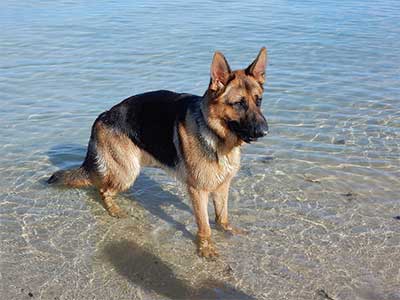 How Do I Train My German Shepherd to Swim?

As mentioned before, training a German Shepherd to swim is not difficult. Their natural intelligence, strength, and agility will aid them greatly in both learning to swim and performing the high-energy motions necessary when swimming.

However, there are some precautions to take when teaching a Shepherd to swim. You will still need some equipment to keep your furry friend safe before you take them anywhere near the water.

You will need a swimming collar and s life jacket before your dog goes into any water environment. The swimming collar will help you be able to locate them. Especially in a long pool where he could swim out of your field of view. The collar also provides a better way to grab them and pull them out. If they start to get in above their head and cannot swim anymore.

The life jacket does the exact same thing it does for humans. Which provides an extra degree of buoyancy to help keep your pet above the surface of the water.

It should also be noted that swimming in a chlorinated pool is not good for your dog. Not at least until they are strong enough swimmer that they do not take in much water. Chlorine is poisonous to dogs just like people, and if they swallow too much of it, the chlorine can make them sick – or worse!

When you begin training, it is best to start small. Still, shallow water (like a pool or pond) this will allow them to get used to the feeling of water the water. You must remember, this is something they are not accustomed to! They should stay away from choppy currents, even when they are experienced swimmers.

If they start to look nervous at this point, do not force them to go deeper! Swimming can be an uncomfortable process for German Shepherds. It may take a few tries in the shallow side before they will feel brave enough to go farther into it.

Always Be Close By

Additionally, make sure to stay near your pet when they are swimming. As having you nearby will help them feel safer and more comfortable with trying to actually swim. As they go further into the water, make sure all four limbs are kicking. They should actually be covering ground as they move into the water at depths where they have to paddle to move.

Turn It Into a Game

Finish off every swim lesson with a treat, and you will see how quickly your dog’s interest in swimming grows with each lesson. If they take to swimming and they learn how to do it. It might not be long before you cannot keep your furry friend out of your backyard pool!

Do Poodles Have Webbed Feet?

How Often Do Huskies Bark? Find Out Why...

Do Poodles Have Webbed Feet?

Do German Shepherds Have Webbed Feet?

Do Dachshunds Have Webbed Feet?

How To Potty Train a Puppy – Avoiding...

Like all of you, we all love our fur babies! We have had people come to us asking for advice on everything from potty training puppies to getting their pets to be more outgoing. We created this website in hopes that our tips, tricks and advice will help others along their pet journey.

As most of us feel, our dogs are not just pets, they are FAMILY!

All published articles on DogAdviceCenter.com are meant for informational purposes only and are not intended to give veterinary advice. Please consult a licensed veterinarian for medical advice.

This website uses cookies to improve your experience. We'll assume you're ok with this, but you can opt-out if you wish. Accept Read More